-there is no why here- is a project by Italian composer Andrea Molino, with David Moss and Anna Linardou as lead singers and direction by Wouter van Looy.

The difference between ‘good’ and ‘evil’ is not only clear to religious leaders. Even George Bush was convinced that his war on terror was ‘a war of good against evil’.  If we dig deeper, however, it seems impossible to define either category in an objective and generally accepted way. Following up on Hannah Arend, There is no why hereoutlines ‘the fundamental problem of the nature and function of the human judgment,’ which implies the problem of responsibility. This performance does not pretend to present a clear solution or even straightforward statements. Rather, it is a collection of different, sometimes contradicting contributions. Images recorded by cameras on stage or by external webcams are an organic counterpoint. The musicians play the video – which is part of the music – as if it were an instrument. 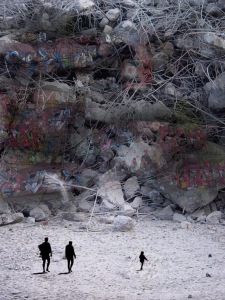